(No reviews yet) Write a Review

The ResMed Pixi Nasal Mask with Headgear is made with both the child and their caregiver in mind. Every feature is carefully considered to address and improve therapy comfort, acceptance, and overall experience for everyone involved. Confident that their child is being treated effectively, caregivers can be free to focus on emotionally supporting their child on their journey.

The Pixi's open style headgear is designed especially for children as well. Soft Breathe-O-Prene straps are lightly coloured and unobtrusive, sitting back on the face away from the child's eyes and ears to reduce irritation and obstruction. Because children may not be able to adjust the fit on their own, the Pixi's 3 headgear straps are designed to be adjusted from an adult's point of view while catering to children of a wide range of ages. Not only can the child see clearly while wearing the mask, but caregivers are also reassured and comforted by being able to see their child's eyes and more of their face.

VERSATILE TUBING Two tubing positions allow air to be moved to either side of the cushion depending on the child's sleeping position. The tubing is also a Spring-Flex Lightweight Tube that stretches and bends easily, so it won't get caught or dragged as the child moves around during sleep.

COMFORTABLE BREATHE-O-PRENE HEADGEAR The headgear materials are lightly coloured for a more reassuring, unobtrusive appearance on the child's face.

QUICK RELEASE AND EMERGENCY LATCH The quick-release latch makes it easy to take the mask off while retaining desired headgear settings. The emergency latch releases the latch even faster than the quick release in an emergency, by pulling firmly on the lower headgear strap. 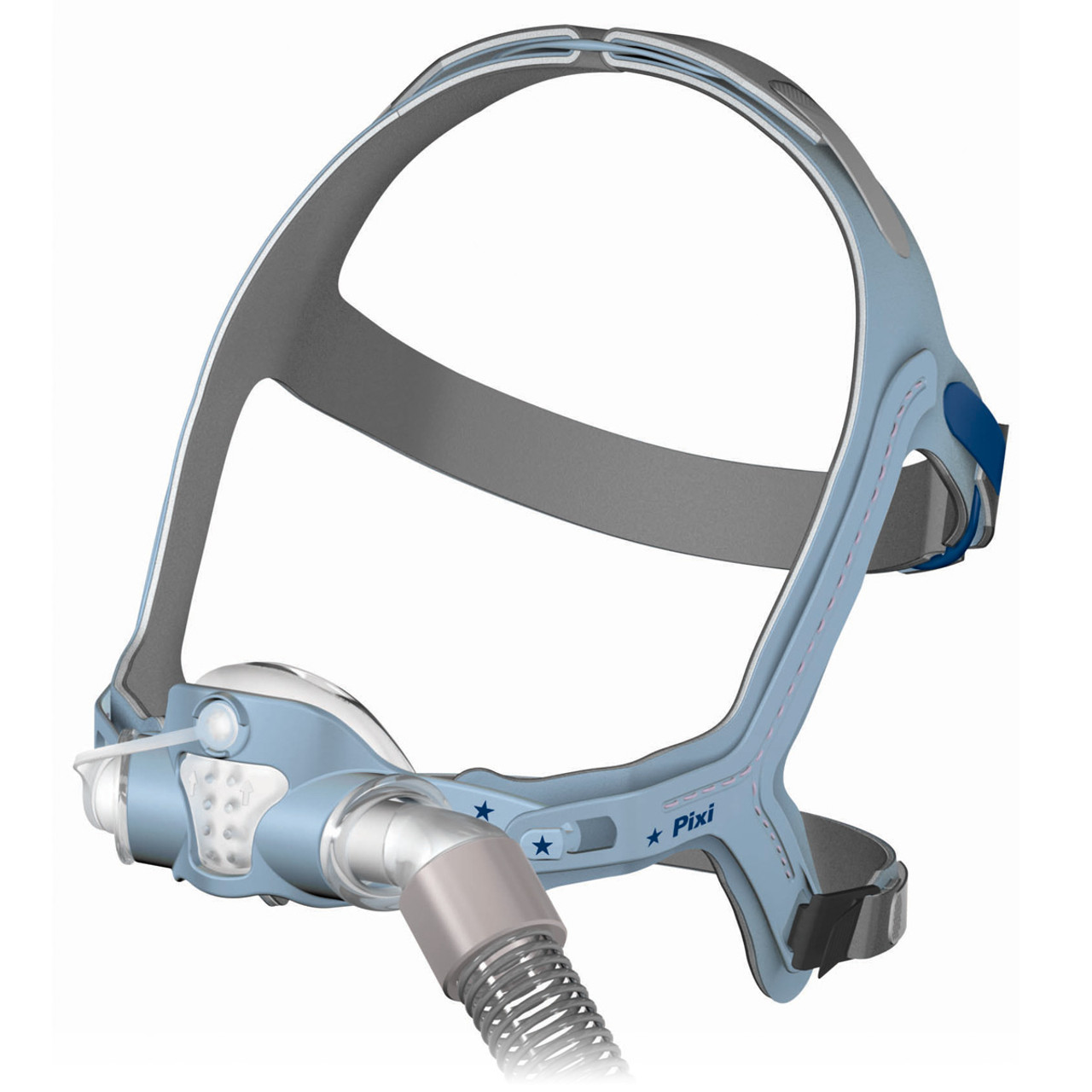 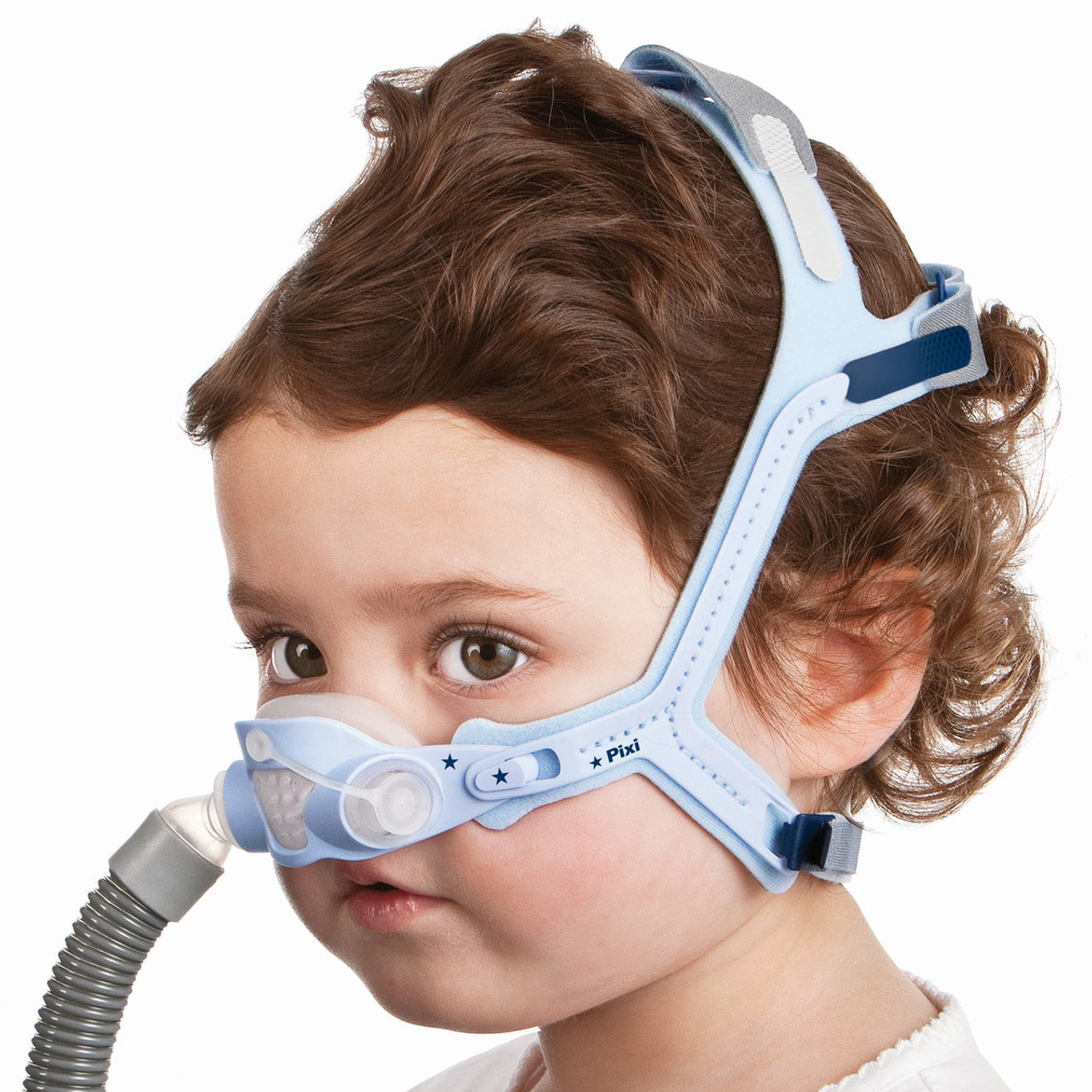 The AirTouch™ F20 CPAP Mask is an alternative version to the popular AirFit™ F20 mask. The AirTouch™ F20 has a foam cushion instead of the silicone cushion found on the AirFit™ F20. This is a full face mask that covers the nose and mouth. Features •UltraSoft™ Memory Foam Cushion •30-Day Disposable Cushion Design •F20 Frame and Headgear •Magnetic Headgear Clips •Quick Release Elbow •Diffused Venting 30-Day Disposable UltraSoft™ Memory Foam Cushion The AirTouch™ F20's differentiating feature from the original Airfit™ F20 is the mask's cushion. The cushion has a memory foam layer that seals on the face instead of traditional silicone. The memory foam is intended to provide a much better fit and seal than silicone. Due to the nature of the foam, it cannot be washed like a traditional mask. The foam can be wiped daily, but the cushion is only intended to last 30 days before being disposed of and replaced. Looking for a F20 mask that lasts 3-6 months? See the AirFit™ F20 Full Face Mask. F20 Frame and Headgear The AirTouch™ F20 uses the same frame and headgear as the AirFit™ F20, meaning that the cushions between the two versions are interchangeable. Existing users of the F20 can purchase the UltraSoft™ memory foam cushion to try on their existing mask, and users who purchase the AirTouch™ F20 can purchase the silicone AirFit™ F20 cushion to try if desired. The frame is one size and fits all three sizes of F20 cushions. Magnetic Headgear Clips The AirTouch™ F20 headgear connects to the mask frame using magnetic headgear clips for ease of use. The magnetic clips lock into place easily onto the frame making for quick placement and removal of the mask. Quick Release Elbow with Defused Venting The Airtouch™ F20 mask elbow is easily added or removed from the mask using the built-in tabs. Simply press the tabs and pull the elbow off of the mask, and click back in to put back in place. The elbow has numerous ports around the elbow allowing air to flow in various directions, making for quieter and less forceful exhalation.

MSRP:
$88.00 $88.00
**This Assembly Kit does NOT include Headgear** The ResMed Pixi Nasal Mask is made with both the child and their caregiver in mind. Every feature is carefully considered to address and improve...
Shop

MSRP:
$31.00 $31.00
The ResMed Mask Headgear for Pixi sits away from eyes and ears to reduce irritation and obstruction. The quick-release latches make this mask easy to remove during the night or in an...
Shop

MSRP:
$109.00 $109.00
The Mirage Micro nasal mask from ResMed combines personalized fit and easy-to-use features to ensure your therapy experience is comfortable and effective. Its MicroFit dial allows for up to 24...
Shop

BUNDLE & SAVE: Purchase this ResMed machine and choose to add optional masks or accessories at discounted prices!